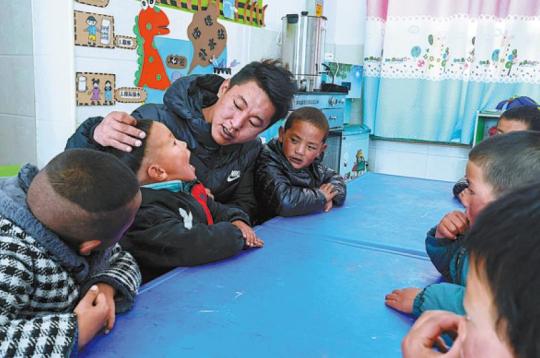 Summer arrives late and leaves early in Phumachangthang, China's highest town, at an altitude of 5,373 meters in the Tibet autonomous region－200 meters higher than the base camp for Qomolangma, or Mount Everest.

At around 10 am, parents and children in thick Tibetan winter robes approach the gate of the village of Tsogo's kindergarten. It's windy and, at -5 C, bitingly cold. The children are quickly led by their teachers into warm classrooms.

Migmar Tsering, in his 20s, is the principal of the kindergarten, which has 13 pupils. A language and art teacher, he was transferred to the kindergarten in October 2020 for a two-year stint.

Born into a farming family in Tibet's Chushul county, Migmar Tsering completed his middle school education in Shaoxing, Zhejiang province, in the 2000s. The school he attended was designated to provide education opportunities for impoverished Tibetan students. There were no tuition or accommodation fees, but two women paid Migmar Tsering's living expenses for the two years he studied in Shaoxing.

His kindergarten is a mix of modern and rustic. "The classrooms, offices and kids' dorms have air conditioners and heaters, but the teachers have to burn yak dung for cooking and heating," Migmar Tsering said, adding that kids warm up every morning with sports such as boxing, cycling and dancing.

"People told me that I would feel dizzy working at such a high altitude, and I worried at first. But I can stand the altitude; I am still young and strong," he said, but added that working in such a harsh environment is not easy. Sometimes he feels dizzy when doing heavy work.

For Migmar Tsering, working as a teacher is an honor and an ideal job. "I received financial help for my schooling years ago, and now it's time for me to repay society," he said.

In recent years, he has been thinking about the two women who financially supported his education. On Sept 27, he had a chance to share his story with people from a charity who visited the area to donate sporting goods and educational material.

When he told them of his wish to find the women, a journalist with the group offered to help. Within a week of the release of a video about the principal's story on Chinese social media, he found his benefactors.

One of his former middle school teachers saw the video and provided the contact numbers of the women, who Migmar Tsering spoke with on Monday. He invited the women to visit Tibet and they reciprocated with an invitation to visit them in Zhejiang.

"I am happy that one of my former teachers from Zhejiang helped find my two helpers," he said. "We had a long talk on the phone, and I promised I would send them some local specialties and gifts to express my thanks. ... I want to be a kind and thankful person－a helpful person."