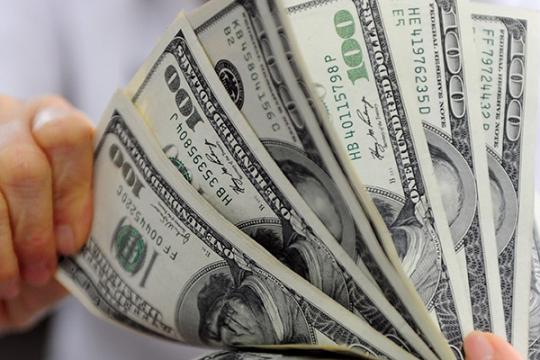 A teller counts and arranges dollar notes at an Agricultural Bank of China branch in Qionghai, Hainan province. (Photo/China Daily)

Total foreign investment in China for 2021 is likely to surge by double digits from a year earlier if current trends continue, said the Ministry of Commerce on Thursday.

Shu Jueting, spokeswoman of the ministry, told an online media briefing that foreign investment in China has achieved faster-than-expected growth so far this year, thanks to efforts by different government departments at both the central and local levels to attract foreign investment.

A report released by the United Nations Conference on Trade and Development in October said global foreign direct investment flows in the first half reached an estimated $852 billion, showing stronger than expected rebound momentum.

It also said the global FDI outlook for the full year has improved from earlier projections, and the current momentum and growth of international project finance are likely to bring FDI flows back to pre-pandemic levels.

As the Chinese economy has been growing stably, the nation still has comprehensive competitive advantages in attracting foreign investment in terms of industrial support facilities, infrastructure, human resources and its business environment, Shu said.

"The ultra large scale market in China has become increasingly attractive to foreign investors, who have stable expectations and firm confidence in investing in China," she said.

Among this, inflows into the service sector hit 752.52 billion yuan, growing 20.3 percent from a year ago. The growth rate of actual use of foreign investment in high-tech industries hit 23.7 percent.

The videoconference between Chinese President Xi Jinping and United States President Joe Biden has showed the direction of Sino-US relations and set a baseline tone for their communications in the economics and trade sector, Shu added.

Economics and trade teams from the two nations will implement the consensus, and the ministry will update the public with any new information.

Zhou Mi, a senior researcher at the Chinese Academy of International Trade and Economic Cooperation, said China and the US have huge cooperation potential in economics and trade, as reflected by the fast growth of their bilateral trade despite impacts from the COVID-19 pandemic.

The additional tariffs adopted by the two countries amid the trade dispute have imposed disruptions on market and economic activity, and the two nations should strengthen dialogue to ease uncertainties for investors, especially those related to inflation and supply chain stress, Zhou said.

Swire Coca-Cola, the fifth largest bottling partner of Coca-Cola by global volume, recently announced the launch of an expansion and reconstruction project for its Zhengzhou factory in Henan province, with a total investment of no less than 900 million yuan.