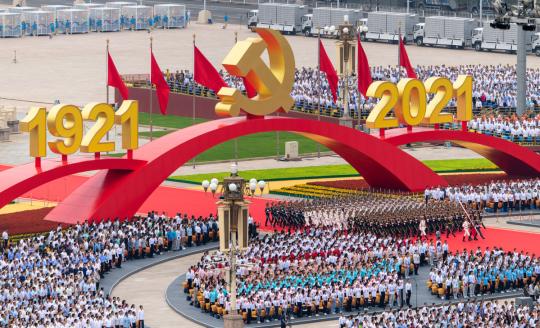 A grand gathering is held to honor the centenary of the CPC at Tian'anmen Square in Beijing, July 1, 2021. （Photo/Xinhua）

The Chinese phrase "jian dang bai nian", meaning the 100th anniversary of the founding of the Communist Party of China, was chosen as the nation's most popular phrase this year, while the hottest word related to domestic issues is "governance".

They are among a list of popular words and phrases collected during an annual assessment that sifts through characters used by Chinese-language media and chosen by netizens.

Organizers included the National Language Resources Monitoring and Research Center and the Commercial Press publishing house. It is the 16th time the lists have been published.

From 1921 to 2021, the course of an ancient Oriental country has been changed due to the founding of the CPC, the list's organizers said. Looking back at the past century, the nation's struggle and rejuvenation was deeply interwoven with the growth and rise of the Party, they explained.

History has proven many times that no matter how many hardships it faces, the Party, still in its prime, can achieve new glory in the new era together with the Chinese people, they said.

"Governance" made the list as the country has issued many good policies this year, such as providing free COVID-19 vaccines for all people and reducing students' excessive academic burden, the organizers said.

Entering the post-pandemic era, the strength of China's governance has yielded positive results, they added.