Nation's volunteers impress in roles around the globe 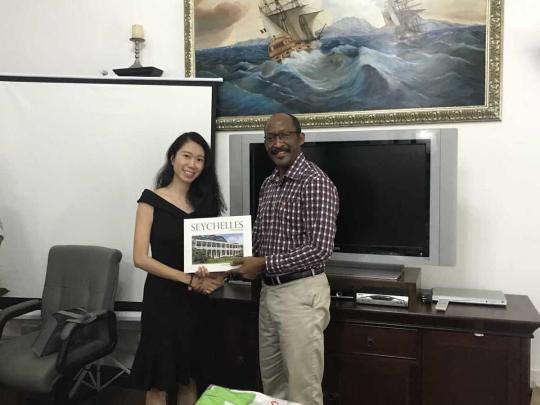 When Xu Yujun arrived in the Seychelles after an 18-hour flight from Guangzhou, capital of Guangdong province, in January 2018, the first sight that greeted her was the poorly equipped airport, which was smaller than a typical railway station in China.

For the next year, she worked as an engineer and Chinese youth volunteer for a government-owned company in Victoria, the tiny capital of the Indian Ocean archipelago, where she was responsible for operating and maintaining a computer server.

Although she had trained for the work and was fully prepared to fulfill her duties, Xu faced challenges.

The first problem was daily commuting. "Buses in the Seychelles are similar to those that became obsolete in China in the 1980s, so you often have to wait a long time for one to arrive. This prompted me to walk 30 minutes to work every day as the best form of commuting," she said.

But the biggest challenge she encountered in the first three months was difficulty in communicating.

On her first working day, Xu was invited to attend a regular department meeting.

"However, I found it hard to understand what people were saying during the two-hour meeting, due to their accents. I had a general idea about the working process, but I knew nothing about the details of my department's work.

"The meeting almost destroyed my confidence, and I was worried whether I could do my job and complete my volunteer service."

Xu then met a group of sympathetic colleagues. "My supervisor explained the work to me patiently and encouraged me to express my thoughts," she said.

The encouragement and support she received from her colleagues meant a lot, Xu said, and after three months of adapting to her new surroundings, she overcame the communication difficulties and became more efficient at work.

She said voluntary service gave her the courage to adapt to a new environment, embrace challenges, strengthen her determination to improve her skills, and offer a helping hand to more people.

China began providing assistance to the Seychelles in 1977. In addition to helping with construction of hospitals and schools, by the end of 2018, the nation had sent 106 of its young people to the Seychelles to work voluntarily, according to the Ministry of Commerce.

The Seychelles is among 23 developing countries in Africa, Asia and Latin America to which China has sent hundreds of young volunteers to offer assistance in various fields. These include Mandarin tuition, physical education, medical treatment, information technology and agricultural techniques.

In 2005, the program was formally incorporated in the government's foreign aid policy. From 2006 to 2009, the program sent 300 young volunteers to help in African countries, fulfilling a goal set at the third Forum on China-Africa Cooperation in 2006.

Yang Yegong, head of the overseas service program, said China sends volunteers based on the needs of recipient countries.

The program was launched in line with the country's "going out "strategy, Yang said, adding that young Chinese volunteers act as goodwill ambassadors to promote friendly exchanges with other countries and interaction between China and the world.

He said the nation's young volunteers have the passion to help those in need, act with good intentions and have a strong desire to engage in meaningful humanitarian affairs.

Conscientious Chinese volunteers have made positive contributions to promoting economic and social development in recipient countries, he added.