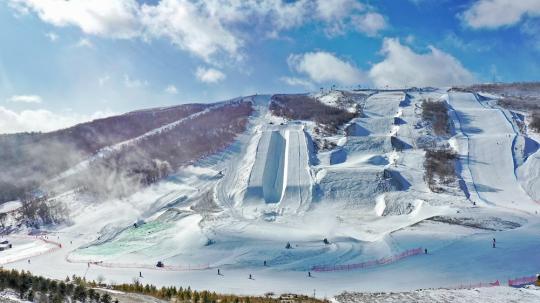 Environmental protection has been made a priority for venues in the Zhangjiakou competition zone at the upcoming 2022 Beijing Winter Olympics.

The location of the National Ski Jumping Center was carefully selected to avoid the use of underground water for snowmaking, said Wang Jingxian, venue and infrastructure manager of the center in the Games co-host city of Zhangjiakou, Hebei province.

"Before constructing the venue halfway up the mountains in the Guyangshu area, we calculated the volume of surface water that can be collected from the mountains in summer, through means such as rainfall and natural springs. Scientific research data has shown that such water is enough for snowmaking and supporting the operations of the venues," Wang said.

A reservoir with a capacity of 200,000 cubic meters was built to collect water for the venues in Guyangshu, including the National Ski Jumping Center and the nearby National Cross-Country Skiing Center.

Li Zhenlong, venue and infrastructure manager of the skiing center, said the venue also has five smaller water storage facilities eradicating the need to use underground water and harm the environment during snowmaking.

"Also, we have planted many trees while constructing the courses. Furthermore, the venue is 100 percent powered by wind and solar energy. We have made great efforts to achieve sustainable development," Li said.

To minimize carbon dioxide emissions, about 700 hydrogen-powered vehicles will be used in the Zhangjiakou competition zone, said Wang Hewu, executive director of the Zhangjiakou Hydrogen and Renewable Energy Research Institute.

The vehicles will be used for transportation and logistics operations during the Games, which will run from Feb 4 to 20.

"The emission of hydrogen-powered vehicles is just pure water so it won't cause any pollution. Furthermore, the hydrogen fueling the vehicles is produced with wind power so the whole process is green," Wang said.

A hydrogen-powered bus can reduce carbon dioxide emissions by 11.8 metric tons over 10,000 kilometers. Such buses can run smoothly at -20 C, and their safety and reliability have been tested, Wang said.

Currently, there are more than 444 hydrogen-powered buses in operation in Zhangjiakou, covering nine bus routes in the city. They have run about 20 million km and carried more than 62 million passengers, according to the local government.