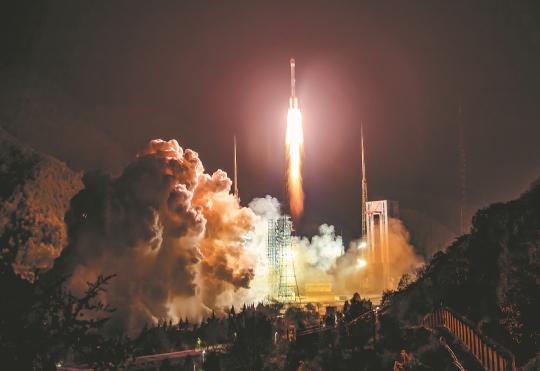 A Chinese Long March 3B carrier rocket blasts off at 0:43 am on Thursday from Xichang Satellite Launch Center in Sichuan province, marking the 48th flight of the Long March rocket family this year. LIU GUOXING/FOR CHINA DAILY

The rocket blasted off at 0:43 am and transported the Communication Technology Demonstrator 9 experimental satellite into a geosynchronous orbit, China Aerospace Science and Technology Corp, the nation's leading space contractor, said in a statement.

Developed by the company's China Academy of Space Technology, the satellite is tasked with verifying multiband, high-speed satellite communication technologies, the statement said.

The mission was the 48th flight of the Long March rocket family this year.

Long March rockets have carried out more orbital launches this year than any other rocket family in the world, and all were successful.

Earlier this month, the Long March family reached its 400th flight mission with a Long March 4B rocket lifting off from Jiuquan Satellite Launch Center.

China launched its first carrier rocket－a Long March 1 that was based on a ballistic missile－in April 1970, to send its first satellite, Dongfanghong 1, or East Red 1, into space. The mission made China the fifth country capable of building and launching its own carrier rocket capable of reaching Earth's orbit.

Since then, the country has developed and launched more than 20 types of Long March-series rockets, and 15 of them are in active service.

Due to the Long March family's frequent flights, China is expected to fulfill more space missions this year than any other nation, with 55 orbital launches.

The United States has launched 45 rockets this year, ranking second in rocket liftoffs.

"They are designing the Long March 9 super-heavy rocket that will be powerful enough to transport astronauts to the moon and larger probes into deep space," he said.

TRANSLATE with x
English
TRANSLATE with
COPY THE URL BELOW
Back
EMBED THE SNIPPET BELOW IN YOUR SITE
Enable collaborative features and customize widget: Bing Webmaster Portal
Back