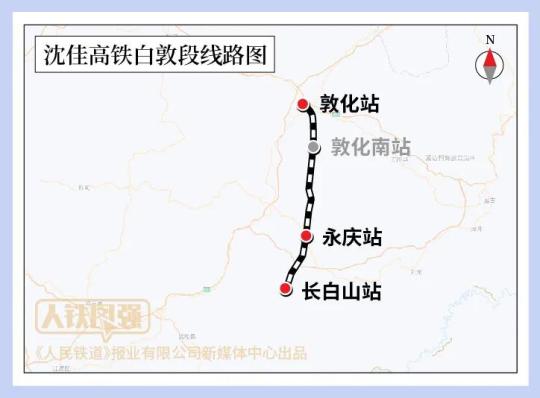 The 99-kilometer line, which has a designed top speed of 250 km per hour, connects Changbai Mountain and Dunhua in Jilin. Passengers can travel from Changchun, the provincial capital, to Changbai Mountain in less than two and a half hours.

The line passes through primitive forests and has been dubbed the forest high-speed railway.

China State Railway Group, the national railway operator, said it will boost tourism in the scenic area and enhance the development of northeastern China.

Xu Lisheng, the chief engineer of the line from China Railway Design Corp, said designers followed green concepts to select a route that minimized the need to cut down trees during construction.

The newly built Changbai Mountain Railway Station is located in a forest, and designers attempted to make it blend in with its surroundings. They chose a special white roof material to resemble the snow on Changbai Mountain, Xu said.